Not a new book, but a recent acquisition for the library at the Department of Coins and Medals, at the British Museum – kindly donated by Simmons Gallery.

LIU Chunsheng (b. 1955) – after graduating from the PLA Xi’an Institute of Politics, being sent to the countryside during the Cultural Revolution, being in the army, then in banking, he eventually moved into the cultural sector as China began to reform and open up. He was in the first Cultural Relics Appreciation and Identification Study Group (organised by the Cultural Relics Bureau), and attended a Writers Workshop at the Lu Xun Literary Academy, and since then has been a prolific writer of historical fiction and articles on various subjects. He is a special contributor to national-level publications on the appreciation of antiquities. A director of the China Numismatic Society, he is also a member of the China Writers’ Association, the Great Wall Society, Visiting Professor at the School of Finance at Renmin University, and Deputy Secretary General of the Beijing Yanhuang Art Museum. He is also a collector of coins and charms. In addition to writing this book on charms (2005), he was also editor-in-chief of the Dictionary of Chinese Numismatics – volume on charms《中国钱币大辞典压胜钱编》(2013)

“The first book in China devoted to openwork charms” says the blurb on the back.

This is a beautifully produced book with colour images throughout. It includes 244 openwork charms from the Han dynasty to the late Qing dynasty, illustrating both sides of each piece, and giving the metal, dynasty, diameter (mm), thickness (mm), rarity (1 star = common and 5 = rare). Unless otherwise indicated, all the charms are from the author’s personal collection (data from pieces in other collections were supplied by the relevant owner). The authors states that all the charms in the book are genuine pieces, and the images are from scans or photographs.

A few sample pages below:

Pages from the Introduction

First 2 pages in the catalogue section on flowers and plants 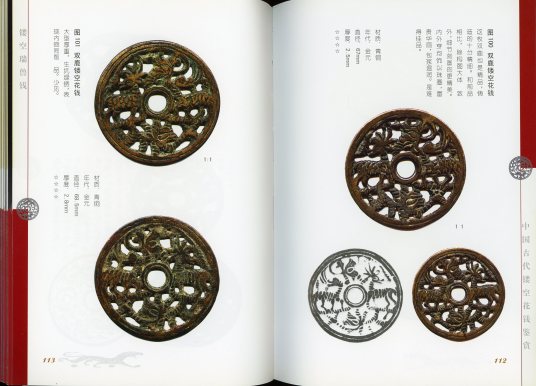 Pages from the catalogue section on auspicious animals (deer)